Hyman Capin, the son of a tailor, was born in Ponevezh, Kovno, Lithuania, to Mose and Chiatsilla Kapinski. Although apprenticed to his father, he learned much of his craft in London after his family emigrated to England when he was twelve. When he was eighteen his family came to the United States and their name was changed to Capin. Living first in New York City, Hyman and his brothers found their way to Harrisburg, Pennsylvania. Here Hyman met another young Russian emmigrant, Dora Dobra Loon. They were married in 1896. In 1899 Hyman became a United States citizen. 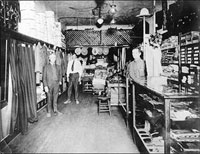 Hyman Capin (left) in his tailor shop with son-in-law
Harry Chernin (right) and an employee. Columbus, NM, circa 1919

In 1905 due to Dora's health, the couple and five children moved to Yuma, Arizona. From Yuma, which they found to be too hot, they moved to Los Angeles,  California, which they found too humid. So they came to Tucson, Arizona. Initially the family lived in "Tent City," located on Park Avenue about three blocks north of Speedway, which was an area designated for newcomers with various repiratory problems. Dora's health improved. In 1908, when their son Jake was born, the family lived at 599 North 3rd Avenue and the children began attending Holladay School.  After son Hilliard was born in 1910, Hyman took a job as tailor for the Army at Fort Bliss in El Paso, Texas. Here their eighth child and youngest son, Zellie, was born. They followed the Army to Columbus, New Mexico, where they lived from 1914-1919, and where Hyman opened his own tailor shop. He and his family kept the original sign for the business.

When the Army withdrew from Columbus after the capture of Pancho Villa, the family moved to Nogales, Arizona. Hyman tailored for Camp Steven D. Little and again opened his own shop where he would train as many as forty tailors. It was here that he designed a basic pattern that could be adjusted to fit all sizes. In 1922 he bought the first of what would become a series of retail stores, the S. Leeker Dry Goods, at 127 Morely Avenue. It was called the El Paso Store. A second store, La Ville de Paris, was bought in 1924. As he entered the retail trade, he adopted a business motto that always hung in the company offices: You can't do business from an empty wagon! By 1930, the family incorporated its holdings as Capin's Department Store listing as assets the S. Leeker Dry Goods Company (Nogales, Arizona) the Charles Dumazert Dry Goods Company (Nogales, Arizona), and the Boston Store, Inc., ( El Paso, Texas) seen in this 1928 photo taken by A. Casasola.

Hyman Capin died in 1935 in Tucson where he had moved after retiring and leaving the operation of the stores in the hands of his sons and sons-in-law. The family expanded their business holdings as the Capin Mercantile Corporation (1949) contributing to a wide variety of charitable and civic causes. The family was recognized in this  1990 proclamation from José Luis de la Ossa, Nogales' Mayor. A July 23, 1997, interview with Zellie Capin, Hyman and Dora Capin's youngest child, provides information about the family and its life in Nogales, Arizona.

Also, read how the family tradition of service to the community is carried forward by Esther Capin.