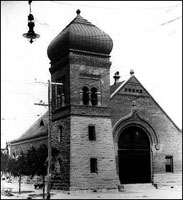 "Temple Mount Sinai was founded in 1898 out of an expanding need to be more than a cemetery association. We have owned three homes in our history, and are currently located at 4408 North Stanton Street. Renowned synagogue architect Sidney Eisenshtat designed this magnificent structure, nestled into the Franklin Mountains. Our home continues to be an inspiration for us to live our lives with spiritual meaning."
from Temple Mount Sinai's website

The image above is the original Temple Mount Sinai synagogue, probably taken in the early 20th century. The caption typed at the bottom of the second photo reads: "Temple Mt. Sinai, - A Jewish house of worship, erected erected 1899 corner of N. Oregon Street and East Yandell Boulevard. At this time (1944) this building is used as a young persons recreation center. It is called The Teen Canteen." The photo of the cornerstone from its dedication shows the traditional Jewish calendar year of 5659 and the Augustan calendar year of 1899. The synagogue can be recognized in the lower right of this 1900 bird's eye view map of El Paso. The second Temple Mount Sinai synagogue's cornerstone marks marks the dedication of the second Temple Mt. Sinai, 5676 or 1916 c.e.