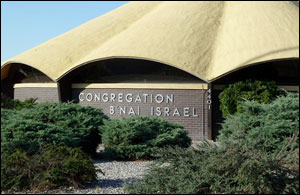 In her Greetings in Congregation B'nai Israel's tribute book, former Rabbi Estelle Mills identified the importance that members of a congregation make in a synagogue's life. "It is not a building that defines a Synagogue," she wrote, "it is the People." Consistent with that theme, Congregation B'nai Israel issued a tribute book honoring its 50 year members. L'Dor V'Dor -- From Generation to Generation: A Tribute to Our 50- Year Members, includes a history of the congregation and interviews with 37 of the congregation's founding members. A copy of the tribute book, which was issued on November 5, 1994, was donated to the Southwest Jewish Archives.

In Tribute's history section, "Fifty Years of Progress," one learns that Congregation B'nai Israel was formed in 1920 to provide "traditional Jewish services and community activities" and to organize a Hebrew school. Over the next 14 years, religious services were held sporadically in homes and rented halls. In 1934, the congregation rented a facility at 116 1/2 West Central and began holding regular services. Happily, the congregation grew over the next ten years and, in 1937, the Ladies Auxiliary purchased a lot at Coal and Cedar Avenues. Then in 1941 construction began on a synagogue.

In the 1950's, a synagogue expansion enlarged the kitchen and added three classrooms and a social hall. The social hall also provided additional seating during holiday services. By the end of the decade, though, the congregation saw the need for a new building. In 1959 a tract of land for a new synagogue was purchased. It was not until 1969, however, that the building fund was substantial enough to begin construction on a new synagogue, school and social hall. The last meeting was held at Coal and Cedar in November 1970, and the traditional Torah procession from the old synagogue to the new was held shortly thereafter. In the mid-1970's the sanctuary was remodeled and the Temple add its beautiful sculptured Ten Commandments, sculptured candelabra, and tapestry doors. The synagogue again expanded in the late 1980's with two new kitchens, a renovated social hall, and an education wing.

Page 17 of Tribute acknowledges "Frances Katz for writing the history of Congregation B'nai Israel ... from 1972 to the present. The earlier history was written by an unknown author and published in the Dedication Book in December 1971, commemorating the building of our current building." Visit Congregation B'nai Israel's website to read its history, The First 90 Years.