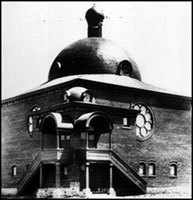 When Congregation Albert celebrated its first 75 years, 600 copies of a limited edition Diamond Jubilee History was printed. Number 473 of this run was donated to the Southwest Jewish Archives.

The history, Congregation Albert, 1897-1972, was written by Professor Gunther Rothenberg, a scholar of European and Jewish history at the University of New Mexico. In his preface to the history, Professor Rothernberg noted that Congregation Albert has been active for seventy-five years far away from the major centers of Jewish activity. The Temple has played an important role not only in the Jewish community of Albuquerque, but also in the state and the region."

Congregation Albert's origins came in 1883 with the formation of the Lodge No. 336 of the Independent Order of B'nai Brith (Sons of the Covenant). As Tobias noted in his book A History of the Jews in New Mexico, Albuquerque's first Jewish organization was secular in nature, rather than religious. By 1896, Lodge No. 336 had over 70 members and discussions began a year later to form a new congregation. Led by the Ilfelds, Grunsfelds, and Neustadt, Albuquerque's Jewish residents formed Congregation Albert. The name was awarded by auction. The Grunsfeld's family, by virtue of a $250 pledge, won the privilege of naming the new congregation and selected Albert, in honor of Alfred Grunsfeld's late father.