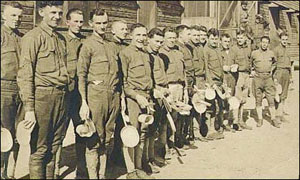 1918, Alex Wernick, front row, third from left
Alex always had a kind word and big smile for everyone

On October 5, 1918, while stationed at Fort Ethan Allen in Vermont, Alex wrote a letter to his friend, Hyman Karp. He encouraged Hyman, who had been rejected for military service, to support the war effort through the purchase of Liberty Bonds. The letter also includes a vivid description of Vermont's fall foliage. The lack of grammatical or spelling errors is remarkable for a man with only 3-4 years of formal schooling. During the following half-century, Dr. Hyman Karp was with them and their families through many trials and tribulations. He was not only their friend but their advisor and respected physician.

Alex was honorably discharged on April 8, 1919. In 1920, he was issued a license to "Hawk, Peddle and Vend Merchandise, and to sell by auction his own Goods, Wares, etc."  During the next five years, Alex worked primarily in his parents' store, serving as the store's technician - laying linoleum floors for their customers. He also became a postman and delivered US. Mail.

He remained at home and continued to contribute to the support of his family until his brother and his sisters completed their education. The sisters completed high school, business school, and some college - and one became a grade school teacher. Brother Willie studied dentistry, and for more than 40 years Dr. Wolf Wernick conducted his dental practice at 1707 St. Johns Place, Brooklyn, NY. His first office was located on the level above the family's store. Years later, after the store was closed, his dental office was moved to the lower level of the building. It was in "Uncle Willie's" dental office - in fact, right in the patients' chair - that lessons in algebra, geometry, and trigonometry were given to his many nieces and nephews.

By the mid-1920's, Alex was in his early 30's. His parents were economically self-sufficient and his siblings were educated young adults. It was time for him to marry and start his own family. On October 10, 1926, 24 year old Ida Orlinsky and 33 year old Alex Wernick were married at the Rockaway Mansion in Brooklyn, NY. Ida and Alex's Ketubbah (definition of Ketubbah) 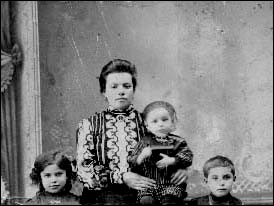 Malka and her children

Ida was the eldest daughter of the five children of Lippe (Louis) Orlinsky and Malka (Mollie)  Epstein Orlinsky. In 1910, Lippe left Baranovich, Russia and traveled to the United States. After working and sending money back to his family in Russia, Malka and her children, Benny, Ida, and Phillip, and Sylvia (Sofia in Russia) were able to join Lippe in the United States in 1912. Coincidentally, they too traveled across the Atlantic on the S. S. Ethiopia. Another daughter, Cynthia, was born in the United States. 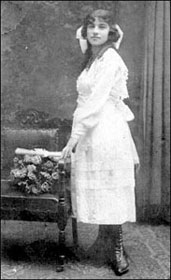 The Orlinsky family lived on the lower east side of New York in a tenement on Ludlow Street. To meet the religious needs of the large influx of Jewish immigrant families moving to Brooklyn, new synagogues were needed. Lippe obtained employment as a carpenter for synagogue construction. The Orlinsky family then often lived behind the "shul" and also served as the caretakers. It was necessary for Ida to leave her formal schooling at the age of 14 in order to help support her family. With her mathematical ability and her beautiful handwriting, she became a bookkeeper for Gimbel Brothers Department Store on 34th St. in Manhattan. Ida loved music, especially operatic arias, and used some of her first week's wages to purchase a record playing machine. This enraged her father who wanted her to contribute all her earnings to the family and anything extra was to be donated to the "shul." Spending money on music, according to Lippe, was wasteful!

continue with Irwin and Barbara