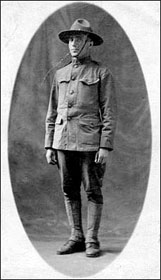 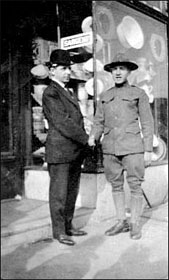 Sometime between 1907 and 1917 Elkune became known as Alex or Alexander Wernick. Everyone called his brother "Willie" but Velvil had been given the legal name of Wolf Wernick upon his arrival at Ellis Island. The English translation of the Russian word "velvil" is wolf.

In 1917, with the beginning of World War I, Alex enlisted for service in the Militia of New York State. In 1918, he was declared eligible to serve in the military, and he became a soldier in the Cavalry of the Army of United States. (Draft Card) Within a few months, Private Alexander Wernick was appointed Corporal, Battery "D," 59th F.A. stationed at Camp Jackson, South Carolina.

continue with Ida and Alex