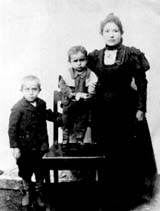 According to family anecdotes, Rochel left Russia with her two sons in 1903. Travel documents were issued for a woman and her two children - one son and one daughter. Rochel, fearing that she would lose permission to travel to the US., did not report the error to authorities. Instead ten year old Elkune was dressed in girl's clothing for the voyage by railroad across the European continent and the Atlantic Ocean. Records issued by the U. S. Immigration Service indicate that the family traveled on the S. S. Ethiopia and arrived in New York Harbor on February 5, 1905. Their accommodations were in steerage class - the least desirable area of the ship - with limited food and water rations, poor toilet facilities, little light, and ever present sea sickness. 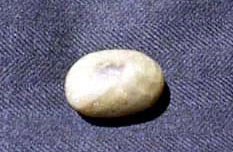 At Ellis Island in New York Harbor, Rochel and her sons passed through inspection and were approved for admission to the United States. Elkune discarded his girl's clothing, kneeled close to American soil, and picked up a small stone. He carried this stone with him every day until his death in November 1975. Ida Orlinsky Wernick and Alexander Wernick Official Certificate of Registration in the American Immigrant Wall of Honor

After the family was reunited, they lived on the lower east side of New York City at 47 Orchard Street. Fraternal twin daughters, Celia and Clara (8th grade), were born in December 1905 and soon were joined by three more sisters, Pearl (1910), Sechie (1911), and Lilian (1913).

Elkune, the eldest son of Rochel and Schmerko (now known as Alter - the "older" - since he was born prior to his twin brother) was enrolled in the local public school. Learning English and becoming a "real" American were his top priorities. Among his new experiences was tasting a fruit he had never before seen - a banana. Was he supposed to eat the peel or the soft "pit" inside? On one school field trip, he and his classmates, all newly arrived immigrant children, were taken to the local ice cream parlor. It was his first encounter with ice cream. How cold and sweet it was!

After about three years of attending school and completing the 8th grade, the students were asked, "Do you want to continue on to the high school level?" He reported to his parents that he had enrolled in high school because he wanted to continue his education. That evening, while preparing to go to sleep on the cot that was set up each night in the kitchen of the small apartment, he overheard his parents talking. "Elkune only wants to go to school and learn, learn, learn. But we need his help. He must go to work, earn money, and help support our family."

Having been denied further formal education, at the age of 14, on November 19, 1907, Elkune received his Employment Certificate, or working papers, qualifying him for employment. Many jobs followed, including one as a conductor on a train. Elkune promised himself that none of his siblings, soon numbering six, one brother and five sisters, would be denied an education. Elkune, with his inquisitive mind and many interests, became a self-taught man. 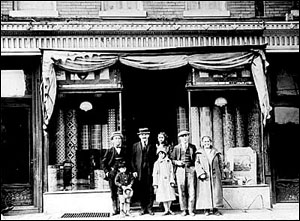 The growing Wernick family improved their standard of living and were able to move to 1703 St. Johns Place in an outlying rural area of New York City called Brooklyn. Approximately three years later, they purchased the three story building (above) two doors away at 1707 St. Johns Place. The price was less than $3000. A hardware store and floor covering business was opened on the street level, and the size of their livingquarters increased. On Dec. 5, 1932, an Auction Sale was held and the family's entrepreneurial endeavor became history.

Another hardware store in the family followed a different and more successful path. Rochel' s brother married Schmerko's (Alter) sister. Their daughter and son-in-law, Clara and Max Fortunoff, began the now famous chain of stores on the east coast known as "Fortunoff's."

The following excerpts are from Pearl and Sechie's 1986 writings about their childhood memories:

"My attention is drawn back to the roof and fire escape as I turn the clock back....We moved from one room at the back of our store - seven children and two parents (all in one room). Yes, we moved two houses away - a 3 story building with a stairway leading to the roof - we enjoyed the luxury of three bedrooms and a kitchen with a fire escape out the window.

I was about four years old and one of my favorite deserts was chocolate pudding. I remember eating this yummy desert before getting seriously ill with diphtheria - quarantined and confined for the duration, using the roof for air. I recall blaming the chocolate pudding for my illness and refused to eat it for many years after that.

Another tidbit - I was seven and my "bigger" younger sister, Sechie, was five. I remember it well - seeing Sechie sitting on the step of Papa's store, devouring the corn bread on which she rubbed garlic and salt on the crusty end and pushed the small pieces into the soft part. We always had plenty of garlic in our home - garlic was very important - we wore it like a necklace to ward off bad omens.

On hot summer nights we enjoyed free air conditioning by sleeping on the fire escape. The fire escape also served us well in the winter where foods were kept cold in a covered container, taking the place of the ice box.

When the youngest, my sister Lilian, at age three, got polio and returned home after months of special treatment, the family was quarantined and the roof was our haven.

Our very humble beginnings did not make us bitter - instead we all continue to count our blessings."

"Memories of my years on St. Johns Place in Brooklyn where I lived from my birth until my marriage in 1934...

Across the street were several farms where they raised goats and cows. We carried our own pails to the farm to buy fresh milk.

In 1918, when we heard the good news that World War I had ended and the Armistice was signed, we and our neighbors danced all night in the streets. My father gave each child five cents and we bought the most delicious Charlotte Ruses. I can still taste the freshness of the whipped cream, with the cherry on top and the soft sponge cake.

I remember the happy hours when the whole family worked in the store, particularly before Passover time. Also, as a youngster I would accompany my dear father when he made deliveries of merchandise in his three wheeled pushcart. I would watch the push cart outside each tenement house as he climbed the steps to deliver the orders.

In back of our hardware store was a kitchen, bathroom, one large room used for sleeping and a "back yard." It was there that we put up our Succah each year. Happy, happy days!"