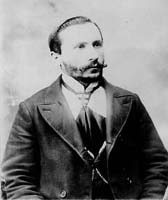 Records of marriages among Jews show that on the 22nd day of November,1891, Schmerko Wiernik, 18, son of Shemeryonu and Bryna Wiernik of Antopola, Russia, was wed to Rochla Leah (Rochel) Sopoznik, 20, daughter of Zacharia and Shayne Krayne Sopoznik of Drohiczynie, Russia. Marriage record [Russian version] [Polish version]  The original document was in one piece, with the Russian text on the left half and the Polish text on the right half.

Birth records of the city of Antopolu indicate that on the 18th day of June, 1893, their first son, Elkunu, was born. A second son, Velvil, was born in Grodno Bernya Drohiczynie sometime in 1898. Elkunu's birth record, page 1, page 2, page 3

On August 7, 1897, Schmerko Shmuliowich Wiernik received a certificate of discharge from the 24th Simbirak Infantry Regiment, in the armies of Czar Nicholas II.

The massacre of helpless Jews, pogroms, during the last decade of the nineteenth century in Russia, convinced Schmerko to seek a better life for his family in the United States.

Permission for Schmerko to "travel through the cities and villages of the Russian Empire, where it is permissible for Jews, until the 17th of March 1900" was granted on March 17, 1899 by the government of Grodno, District of Kobrinsk, village of Antopol. English translation of Schmerko's Russian travel permit and certification by the New York City Commissioner of Deeds statement as to its authenticity.

Schmerko Wiernik was on his way. He left Russia and journeyed to the United States while his wife and two sons remained behind. He arrived in the lower east side of New York City where he encountered few language barriers among other newly arrived Jewish immigrants. He was able to find employment as a carpenter, saving what he could from his wages to purchase passage to the United States for his wife and sons.